Saturated Fat may help save your hair! 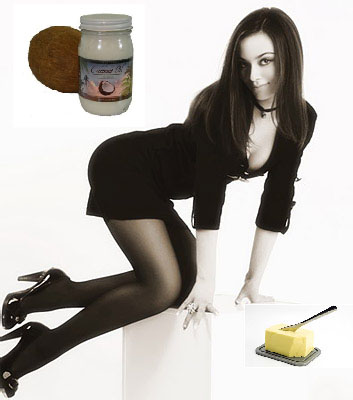 In the October 2006 American Journal of Clinical Nutrition, a study found that both total fat intake and saturated fat intake were correlated with an increase in the risk of heart disease.

This finding is nothing new, in fact it's typical of mainstream researchers.  This study and virtually every other study I have reviewed (with few exceptions) makes no effort to differentiate between transfat and saturated fat.

The premise of the above study in fact states "The results of previous studies on the association between dietary fat intake and coronary heart disease (CHD) incidence are inconsistent."

I've seen similar statements regarding inconsistencies on cancer as well. There's more than ample evidence that trans fats increase cardiovascular and cancer risks, but what about saturated fat?

Prejudice based on a theory produced over 50 years ago has blinded researchers to the benefits of saturated fats in human health.

If saturated fats were of no value or were harmful to you, why would breast milk produce saturated fats like butyric, caproic, caprylic, capric, lauric, myristic, palmitic and stearic acids, which provide a source of nourishment to ensure the growth, development and survival of children?

Saturated fats are essential parts of all body tissues, and among their many beneficial effects.  Saturated fat can lower 5-alpha reductase, the enzyme that catalyzes testosterone into DHT, it also lowers lipoprotein(a), a sticky substance associated with hair loss and cardiovascular disease.

In addition, saturated fat is a major part of the phospholipid component of cell membranes, the preferred fuel for your heart, a useful antiviral agent (caprylic acid), effective as an anticaries, antiplaque and anti fungal agents (lauric acid), useful to actually lower cholesterol levels (palmitic and stearic acids), etc.

Human  beings make terrible laboratory subjects since they are difficult to control regarding intake of food.  Many of the studies reported by the mainstream media are based on food frequency questionnaire data--completely inaccurate and absurdly unscientific.

Why then do we find ourselves besieged with health information on the air waves, often so conflicting?  The media is not in the business of health, its interests solely lie in stirring up vexation to attract viewers.  After all, viewership increases with controversy.

Interestingly, the November 2004 American Journal of Clinical Nutrition came up with the opposite conclusion of the October 2006, titled, "Saturated fat prevents coronary artery disease? An American paradox"

Researchers love to use the words "paradox," well that actually means they're overlooking something.

What's more, the 2004 study was performed in a far more tightly controlled manner than the more recent 2006 study.

Throughout a three-year study, researchers examined the diets and coronary artery conditions of 235 women in the United States with an average age of 66.

At the start of the study, researchers took X-ray images of 10 places along each woman's heart arteries. (All the subjects were found to have some plaque buildup.)

The women kept comprehensive records of what foods they ate and how much, including what kinds of oils they used for frying and baking.  At the end of the three-year period, researchers took a second set of X-ray images.

They found that women who had regularly eaten the highest amounts of saturated fats had the least amount of additional plaque buildup in their arteries.  Also, women who ate more saturated fat had a healthier balance of good and bad cholesterols and more desirable blood concentrations of various kinds of fats.

The researchers even made adjustments on factors such as age, education, smoking habits and use of medication.  One of the best types of saturated fats for cooking or frying is coconut oil.  It has a high smoke point and is one of a very few oils suitable for frying without the risk of excessive free-radicals.

The oils to avoid when cooking are the so-called "heart healthy" canola oil and vegetable oils."  These are not suitable for cooking and will raise 5-alpha reductase enzyme.

For more information about the safety profile of saturated fats, I recommend consulting the following website and books.

"The truth about saturated fat" by Mary Enig and Sally Fallon

"Saturated fat may save your life" by Bruce Fife

Why The Cholesterol-Heart Disease Theory Is Wrong